Michael van Gerwen was top of The UNIBET Premier League, as Gurney and Wade seal the final spots on the final group phase of matches from Leeds.

Gurney progressed to the semi-finals for the first time with an 8-3 win over 2018 finalist Michael Smith, pulling clear from two-all by winning six of the next seven legs.

“I’m delighted,” said Gurney. “I knew I had to win tonight and I was probably the most focused I’ve ever been. Now I’m in the Play-Offs I’ll do my best to win the title.”

Gerwyn Price defeated Peter Wright 8-3 to end the season with victory, although he was left to rue six draws during the campaign as he missed out on the Play-Offs by a point.

James Wade ended Rob Cross’s chances of topping the table with an 8-6 win in the final game of the night, so Michael van Gerwen is the top of the table for the sixth consecutive time. 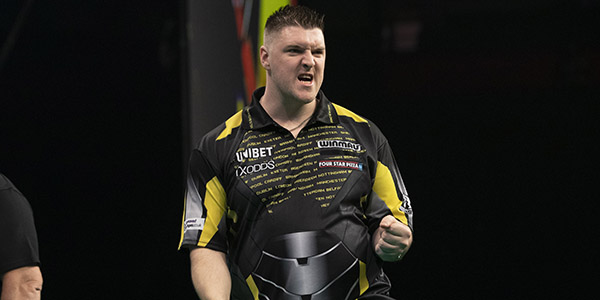