Wade survived missed match darts in both his quarter-final win over Gerwyn Price and a dramatic semi-final against German favourite Max Hopp.

The left-hander then ended Whitlock’s bid to win a second European Championship title as he scooped the £100,000 top prize – just 13 days after becoming a father for the first time to son Arthur. “That was for my son, Arthur,” said Wade. “I’m actually emotional about this – it’s an amazing feeling and I’m going to enjoy this win.

I’ve gone through some tough times but this is for Arthur. I’ve won TV titles before and never made the most of it, but I’m buzzing.

“It’s not often that I am lost for words but I am after this. I’ve shown that I’m dangerous and everyone needs to watch out. “Today I went into every game battling. I’ve been a lucky boy but perhaps that makes up for some of the misfortune I’ve had in recent years, and it’s a step in the right direction.” 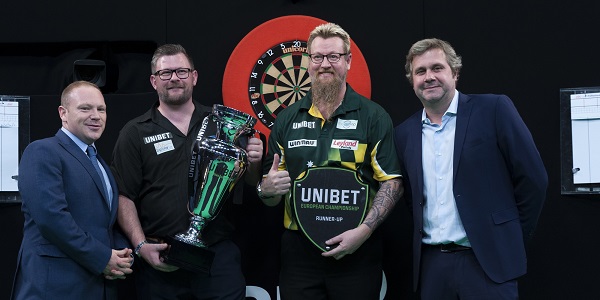 Whitlock also battled his way to the final in dramatic fashion, taking out 110 in the deciding leg of his last four clash with Joe Cullen after coming back from 10-7 down. The Australian, who began the final day of action at the Westfalenhalle with a 10-7 quarter-final defeat of Steve West, opened the final strongly with six perfect darts and led 3-1 early on.

Wade hit back to lead 5-4, but there was little to separate the pair as they remained locked following 16 legs. Wade, though, landed back-to-back 13-dart finishes to pull away to 10-8 before pinning double ten to seal glory.