Netherlands A retained The PDPA Junior World Cup from Gibraltar on Tuesday, beating Netherlands B 4-0 in the Final.

The Netherlands’ victory in the PDPA Junior World Cup in Gibraltar was followed by a win for Keane Barry in the DartConnect Junior International Open and a place in the JDC World Championship where he will face Adam Gawlas.

The JDC staged a three-day festival of darts at the new Europa Point Arena, culminating on Thursday with the early rounds of the Scott Farms International Junior World Championship. Tuesday’s opening event saw the Netherlands A team – which included reigning Junior World Champion Jurjen van der Velde – win the final against Netherlands B by a 4-0 scoreline.

Van der Velde was joined in the Netherlands A team by Owen Roelofs – the runner-up in the 2017 Junior World Championship – Daan Bastiaansen and Luke van der Kwast. The quartet also defeated England A, Ireland A, Spain, USA, China A and England B during the 16-nation event, which saw 26 teams competing.

Keane Barry and Adam Gawlas saw off Daan Bastiaansen and Justin Hewitt respectively and will now play on the Alexandra stage to play the final in December.

Barry has established himself in the past few weeks in particular as a real stand out. This has seen him secure his spot in the Tom Kirby Irish Matchplay final where he will face Liam Gallagher at the World Grand Prix and he also yesterday won the JDC Junior International Open.

This means that he will at least appear at the Alexandra Palace once this December with a Junior and Senior bow potentially on the cards.

Gawlas on the other hand despite not averaging at the heights of Barry has had a stunning few months including showing how good he is at the recent Austrian Darts Championship and the Czech ace will hope to show signs of the future when he faces the Irish ace later this year.

Wednesday’s DartConnect International Open saw Irish teenager Barry come through a field of 129 players to claim the title, edging out Nathan Girvan 6-5 in a high-quality final.

He averaged 100.5 in the final, landing an 11-darter as he moved into a 4-2 lead before Scottish ace Girvan hit back to take the game into a deciding leg at five-all, only for Barry to snatch the title with a 13-dart leg. 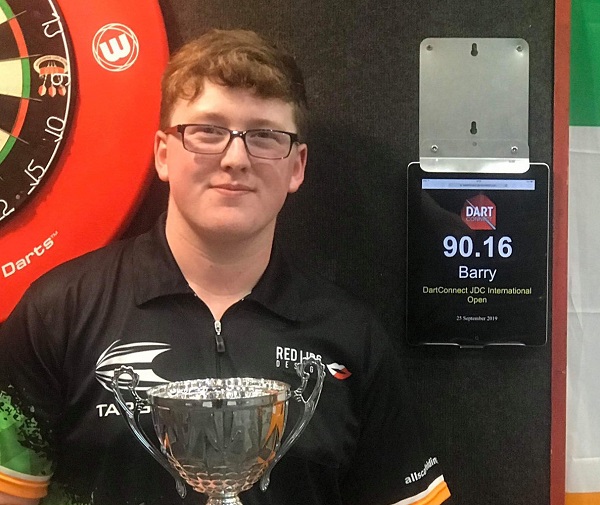 Barry’s success is a further boost for the youngster, who will be competing in the Tom Kirby Memorial Irish Matchplay final in Dublin on Saturday October 12 against Liam Gallagher – with the winner securing a place in the William Hill World Darts Championship.

Adam Gawlas, who recently reached the third round of the Austrian Darts Championship on his European Tour debut, was a semi-finalist, alongside fellow Czech prospect Tomas Houdek.Van der Velde was defeated by Barry in the quarter-finals, while Keelan Kay’s run to  the last eight included a 105 average in his last 64 whitewash of Sankalp Salunke.

Thursday’s final day of action will see the players battling to secure spots in the Junior World Championship final, which will take place on Saturday December 21 at Alexandra Palace during the William Hill World Darts Championship.

Team CANADA: Zach van Vliet, Devin Gross, Hayden Brown, Nathan Sherk – Three times World Champion John Part – To all of our great young players from Canada please go out and play darts like you know how. You will be measured by the success of your attitude more than your throw. Do us proud, and most importantly, enjoy!”

Team USA: Jamison Merritt, Kaden Anderson, PJ Stewart Jr, Buster Graves – USA’s finest Darin Young – I would like to wish the best of luck to the young men representing the USA at JDC World Cup in Gibraltar. Stay focused, play hard and enjoy the opportunity ! all the best Darin.

Team AUSTRALIA: Ky Smith, Mitchell Beswick, Hayden Scott, Lachie Gleason, Cody Dewey, Erin Logan, Tyson Stow, Faith kainuku. – Aussie Legend Simon Whitlock – Hi guys, Simon Whitlock here wishing you all the very best for the JDC World Cup in September, what a great opportunity for you all to show your talent to the darts world. This is an amazing piece of history that the JDC/PDPA/PDC have created for young players not only in Oz but all over the world. Darts has been my life for 35 years and we never had these opportunities, so you should take them in both hands and relish the chances and experience this will bring to you. Wishing you all the best and bringing the Trophy home to Australia… with very best wishes Simon Whitlock’

Team DENMARK
Sebastian Bech, Robin Stegler, Sune Poulsen, Marius Bo Nielse -We are very proud to have the opportunity to send 4 players to JDC World Cup in Gibraltar. We hope that the players will get some experience and use it in future tournaments arranged by PDC.

It is a huge chance for all the players to learn how to play on a higher level, and create friendships around the world. And hopefully it will inspire them to follow there dreams to be a pro dartplayers for the future.

Im sure that they will give everything to make a great result for Denmark. PDCNB (Chairman – Michael Frydendahl & Jann Hoffmann)