White backed up his European Darts Grand Prix triumph earlier in May by going all the way at the Ijsselhallen to rack up a third European Tour title in less than 12 months. Van Gerwen was seeking a sixth successive Dutch Darts Masters crown in front of a partisan home crowd, but the world number one never led in the final of the £140,000 tournament as a gutsy White prevailed in a gripping contest.

The final, contested by the top two seeds, saw a repeat of the German Darts Open and Austrian Darts Open finals, with White wasting no time in racing into a 3-0 lead. White, who tasted success on Dutch soil at the Dutch Darts Championship in Maastricht in September 2018, missed a dart at double top for a 4-0 lead, allowing Van Gerwen to step in and take out 32 to get his first leg on the board.

Newly-crowned five-time Premier League Champion Van Gerwen landed a magnificent 170 finish to raise the roof to break back and followed it up with a hold to make it 4-4. Reigning World Champion Van Gerwen spurned five darts at double as White took out 72 to break throw and move within two legs of the upset, only for Van Gerwen to register back-to-back legs once again and make it all square at 6-6.

The next two legs both went on throw, setting up a tense last-leg shoot-out, which White won with a last dart in hand double ten to end Van Gerwen’s 28-match winning streak in last leg deciders on the European Tour which stretched back to 2014. 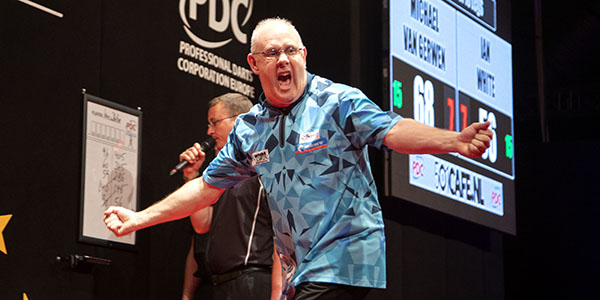 White’s route to victory began on Friday as he survived five match darts from Mickey Mansell to run out a relieved 6-5 winner, before defeating Dutch pair Jermaine Wattimena and Vincent van der Voort on Sunday, followed by a semi-final success over Peter Wright.

The seventh European Tour event of the year reached its climax on the final day of action, with the Last 16 matches played in the afternoon, before the evening session saw the quarter-finals, semi-finals and final take place.

The afternoon session began with bitter defeat for legendary five-time World Champion Raymond van Barneveld who squandered a 5-4 lead as he went down 6-5 to Van Gerwen in an exhilarating all-Dutch affair.

Van Barneveld kicked off the deciding leg with a 180 but failed to back it up, with the result ending the departing Dutchman’s hopes of lifting the title in his final ranking event in The Netherlands. Van Gerwen also came close to defeat in his incredible semi-final with in-form fourth seed Gerwyn Price, which saw the 32-time European Tour event winner prevail 7-6.

With Price waiting on 40 to break throw at 5-5, Van Gerwen fired in a game-changing 143 checkout to hold throw before seeing it out to maintain his undefeated record against the Welsh number one. The weekend was a successful one for two-time ProTour event winner Glen Durrant, who reached the quarter-finals of a European Tour event for the first time where he went down to Price 6-3.